Last night Dean & I ate at Texas de Brazil. We'd never been there before but have friends that have & highly recommended it. I was a little leery because the whole concept of this place is these gaucho guys walk around with slabs of meat & they slice it off onto your plate. It's all you can eat. I'm not a huge fan of meat. I mean it's ok & I'm by no means a vegetarian but I'm perfectly happy to have a meal consisting of appetizers & dips. When you sign up for their emails they send coupons for your birthday & anniversary. Our anniversary coupon was buy on get one free so we decided to try it. Regular price is $43 per person. They have a great salad bar. It has assorted cheeses, soups, veggies, grilled shrimp & what Dean says are the best black beans he's ever eaten in his life. I wouldn't know. I'm not a fan of beans. Anyway, we started with salad & then the meat started coming. My first problem is that the meat is prepared medium rare. Apparently, that's how the Brazilians eat meat. I'm a well done kind of girl. Like I don't want to see ANY pink whatsoever. All you have to do is tell them it's too rare & they'll go cook it more but if you're like me, the sight of the blood dripping from the meat makes you nauseous & pretty much negates any appetite you may have had. There were a few pieces of meat I liked. However, there was more that I didn't like. I tried lamb just because I've never had it. I'll never have it again. It tasted very gamey. I didn't like the chicken wrapped in bacon because it just tasted like a hot dog & I don't like hot dogs. Aside from the salad bar & the meat they bring garlic mashed potatoes, fried bananas & these little bread things that look like donut holes. The mashed potatoes were good & Dean says the bananas were too. I only like bananas in banana pudding & even then I could do without them. The bananas cleanse your pallet so you can "enjoy the different flavors of the meat".  The little bread things were REALLY good. It was almost like a sopapilla. Overall, I wasn't impressed. I was overwhelmed when the gauchos started swarming with meat but that was about it. I wouldn't go back. Dean liked a lot of the meat he tried but even he said it was a one time thing. What did we do after we left??? Went & got shakes at Sonic!!! I was way happier with my shake than I was with the meal!!

This morning I went & had a manicure. It was time for a new set of nails. I think I know how torture victims feel when their nails are ripped out. The nail guy asked if I wanted to soak my hands or for him to pop them off. Popping is quicker so I told him to do that. Several popped right off but several were a little stubborn & it HURT! Thankfully, this isn't something I have to do real often. Of course if I did I'd probably still do it. They look good & I'm all about looks over comfort.

I don't know if y'all have ever heard of Bargain Bee or Living Social but it's sites you can sign up on & they email you half price deals. Most are for restaurants in your area. I've bought several of them for some of our favorite restaurants. One day there was one for a bakery in town, Ambrosia. This bakery has some of the BEST baked stuff ever. After my mani I went to get a sweet treat. 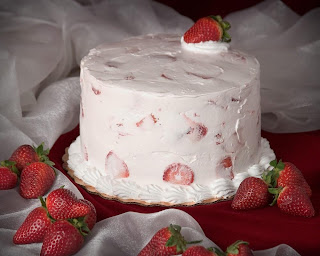 This is the Fresh Strawberry Cake from Ambrosia. It is ABSOLUTELY FABULOUS!!!

Today is LSU's biggest game of the season so far. We play Auburn. Our games against them have a history of weird things happening. With Les coaching I can't see it being any different this year. Both teams are undefeated & ranked high in the BCS. It's going to be interesting.

I hope everyone's having a great weekend!