I had a couple comments & a bunch of emails about my butterfly pictures. Thanks! I thought they were pretty too. I took them with my current camera. You know, "Pencil Camera" as my friend Wendy dubbed it. It's actually much more annoying that I first thought it would be so I've ordered a new camera. WOOO HOOO!!! I'm very excited. After doing some research, perusing a lot of blogs & asking for LOTS of opinions I decided on this one. 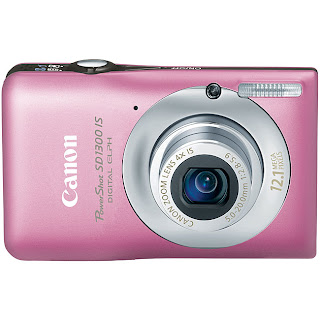 It's a Canon Powershot SD1300. I was planning to wait until closer to Thanksgiving to see if I could get a deal but I found it online on sale with free shipping & no tax so I ordered it. It shipped tonight from Salt Lake City. It says it's coming via UPS but it's not scheduled to be delivered until the 13th. Good grief, why is taking a week?? Anyway, I plan to do something with this camera that I've never done with any others. I plan to learn how to work it!! This isn't the first time I've said this. I'm going to try really hard to follow through. I just really hate reading directions. I'm like a man when it comes to that. Generally, I just read enough to figure out how to take a picture with the auto mode & that's as far as I get. I would really like someone to just show me how to work everything.

Dean & I had dinner tonight at Louisiana Lagniappe. Our 7th Anniversary was Monday & I had a meeting at Church that I needed to attend so we went tonight. If you're ever in Baton Rouge or in Gulf Shores/Orange Beach you must try it. We had Fresh Fish en Papillote which is fresh fish (it was black drum tonight) topped with lump crab meat and shrimp stuffing, baked in parchment paper and finished with a light garlic beurre blanc. Soooo good.

Yesterday, I had a manicure. The color is OPI's Aphrodite's Pink Nightie. It's very shimmery & kind of a neutral pink, if that makes sense.

I hope everyone's having a good week!