This afternoon I went to get a pedicure. This proved to be an interesting visit. While the guy was working on my feet, a couple of girls came in. They said they wanted mani's but they were waiting for a friend. These girls looked like completely normal college girls. The nail guy finishes with my feet & I move to the dryer. The girls are still waiting for their friend. I'm busy playing Words With Friends on my phone when I hear the door open. The door is right next to where I'm sitting so I can't help but notice this. Yes, those are gold booties. Sorry about my finger in the pic. I was trying to be discreet but also make sure I got the pic. Would you like to know the funnier part of this story??? 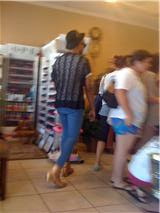 YES, this GUY is the wearer of the booties!! Keep in mind it was 90 degrees today. Not really boot weather. Those are sunglasses he's wearing in the salon too. The story gets better. At least I think it does. When his friends told him they'd already picked their colors his response was "Oh, I brought mine with me". Yeh, that's when I noticed the bottle of polish in his hand.  HILARIOUS!!!! It was all I could do not to laugh.
That was my excitement for the day. Other than the pedi, I had a visit from Allison, Joey & Cael. I made a wreath for Allison & they came to pick it up. I'll have pics later. I had a nice nap & Canes for dinner. Now we're watching the LSU game. They're doing surprisingly well. I don't care if they lose but I don't want to be embarrassed like last week. That's all.
Toodles!
Posted by Traci at 7:36 PM