I'm very excited! I won a giveaway!!! I won a Southern Living cookbook. Those of you that know me, please no jokes about how much I need this. Kendra at Domestic Princess in Training hosted a costume parade. Costumes & Halloween aren't generally my thing. I don't have anything against them, it's just like every other project I attempt. It starts out as a FABULOUS (to me) idea & then never goes according to plan, ends up being a lot more involved than I originally thought & some sort of modification ends up being made. The ONE Halloween costume I've worn was no exception. These pictures are from 2006. 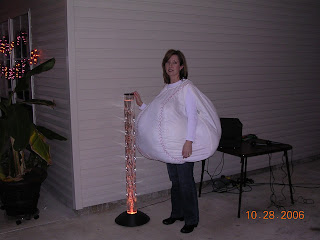 Yes, I'm a pear shaped baseball. I know I looked thrilled in the picture. That thing I'm standing next to is the famous, or maybe infamous is a better word,  pole at my brother's house. Before little Logan came along they had an annual Halloween party. The pole has made an appearance at every party my brother has had & it has followed him from apt. to apt. to house. If you've been reading awhile you may remember the pole from here. 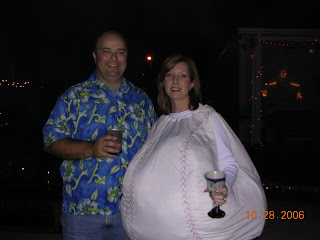 In case you're wondering Dean is dressed as Jimmy Buffet. Bet y'all knew that right?? Let's just say that Dean isn't into costumes or dressing up AT ALL.﻿ Anyway, back to my costume. Approximately 15 years ago I decided that this would be an awesome costume for me to wear to two parties I was invited to. The only problem is that I can't sew. When I say can't sew, I mean can't thread a needle, sew a button, anything. However, my mom's friend can & she did. So what's the problem you ask? Me not thinking this through or not knowing enough about science or whatever is the problem. You see my plan was to stuff the ball with something to make me nice & round & full. My thought was batting like you stuff in pillows or whatever. Only problem is I didn't bother to try any of this out until the night of the first party & clearly 3 bags of batting wasn't going to do the job. Not to mention that everything that you stuff inside immediately goes to the bottom of the costume creating the pear shape. I wasn't happy about looking like a pear. Luckily, my daddy is a amazing when it comes to these types of things. He stuffed about a gazillion plastic grocery bags full of newspaper & strung them together with fishing line & made what can only be described as the weirdest looking shoulder pads you've ever seen. It worked great. You guessed it though, the problems didn't end there. Getting in the car was an issue. We had to detach some of the bags so that I was able to drive to the party & then reattach when I got there. Oh if you could've been a fly on the wall. Once I was all stuffed there was no sitting down. If I sat the whole baseball pushed up & was up around my head. I went from looking like a pear to humpty dumpty! And don't even think about sitting in a chair with a back. That wasn't happening. I was just thinking that I don't remember what I did about going to the bathroom.  Hmmm?? All this brings me to the pictures above in 2006. I decided to wear my baseball costume to Scott & Lydia's party but I wasn't going through all that with the "shoulder pads". I stuffed some newspapers in plastic bags, tied them up & stuffed them inside. That is why I looked like a pear.
Toodles!!
Posted by Traci at 8:22 PM