Here we are again. It's Sunday night. The weekend's over. It's times like this I wish even more that I didn't have to work. Oh well, that time will come one day. I hope anyway.

Today finds us LSU fans still scratching our heads. If any of you watched the game last night you'll understand why. It truly is strange, unbelievable & maddening all at the same time. LSU is 6-0. None of these wins have been pretty. In fact the majority of them have been very close to being losses. Then there's Les, aka "The Mad Hatter". He never answers the questions that are asked & the majority of the time when he's finished talking you say "Huh? What did he just say?". Maddening I tell ya. This has made for some very interesting debates, conversations, etc. There's one faction of the fan base that wants LSU to lose every game so Les will find himself looking for another job at the end of the season. Then there's the faction that like him (that's a very small group of people). After the Tennessee debacle last week, the majority had accepted the fact that we would lose to Florida. Everyone just didn't want to be embarrassed like last week. VERY few people actually thought there was even a chance LSU would win. I was not one of those people. I thought they were going to lose & lose bad. Anyway, after the game the general consensus among the fans is that Les has sold his soul to the devil. There's no other excuse for all of this so called "luck"!

Today Dean & I went to my parents old house so that Dean could help my dad & Scott move mama's piano to the new house. This hadn't been done yet because, well, have you ever moved a piano? It's not easy. In fact, it's pretty hard. Piano's are heavy. They make a special dolly to move them with. Mama was able to rent the dolly & they got it moved & in place at the new house.

While we were there we had lunch. Scott, Lydia & Logan were there too. It was really good. Thanks again mama!

So, now that the piano's in its new home, do you know what that means? 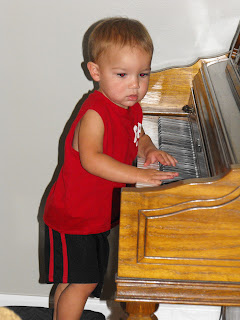 Yep! Logan has a new toy!!! And so does his daddy! 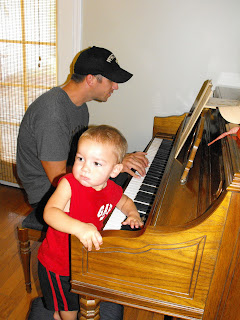 My friend Vicki has lent my mom a bunch of toys & stuff that her little boy Lane, has outgrown. This little dog is one of those toys. Logan LOVES this thing!!! He was rocking so hard I thought he was going to flip it over. 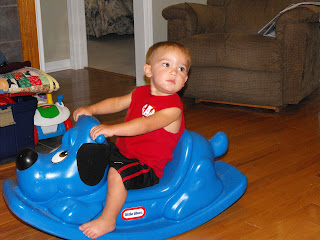 Logan & I were playing with my camera. This is still the "pencil camera". The new one isn't here yet. I promise I do have makeup on but good grief I look pale. 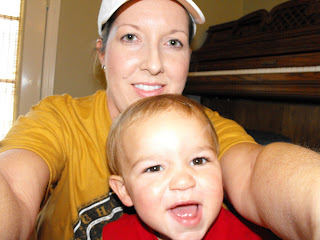 On the way home Dean & I stopped at the Nursery & bought some pumpkins & mums for the porch. Then we came home & watched the Saints lose. That certainly wasn't pretty! Have a great week!
Toodles!
Posted by Traci at 8:04 PM