I feel like all I do is look forward to Fridays. Saturday was the Mardi Gras Mambo. Me, Scott, Lydia & Logan were all running. Dean came out to keep an eye on Logan while the rest of us ran. 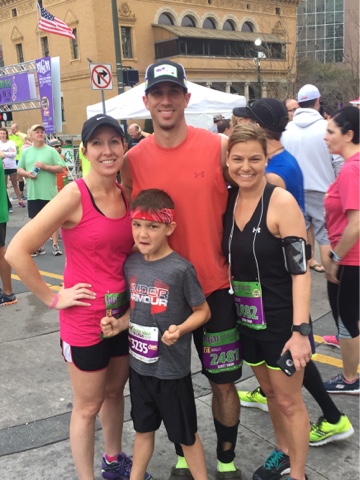 Notice how we're dressed? It was HOT. Me, Scott & Lydia were running the 15K but around mile 4 Lydia decided to do the 10K because it was so hot.

Allie was running the 10K 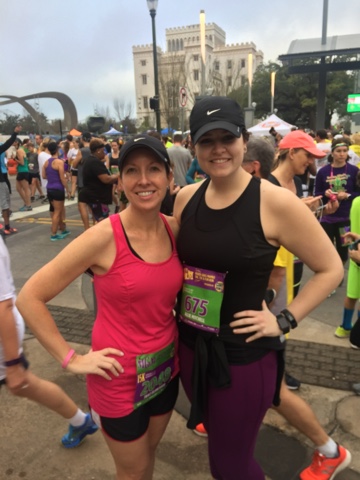 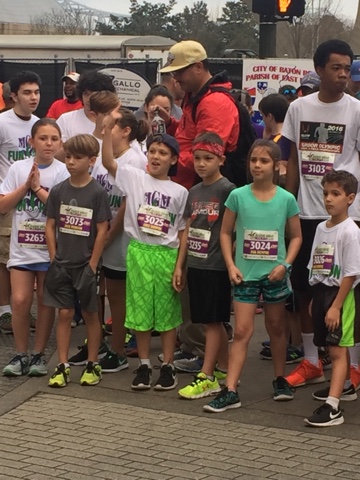 Getting ready to start! 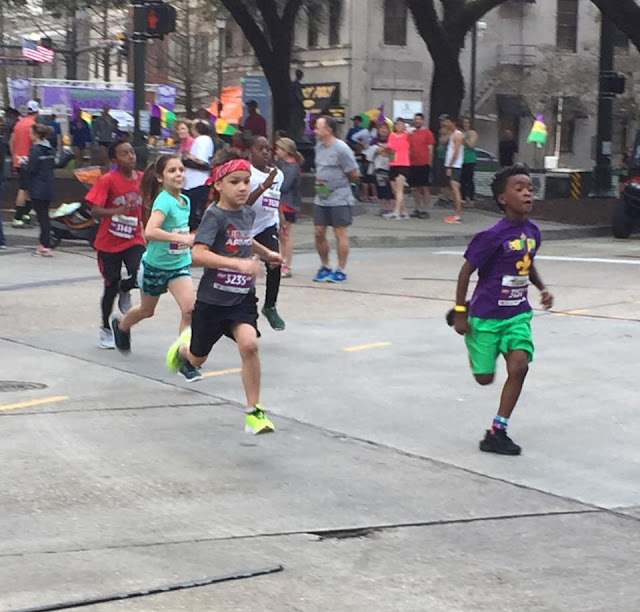 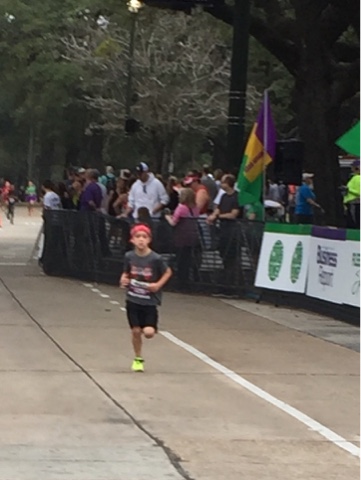 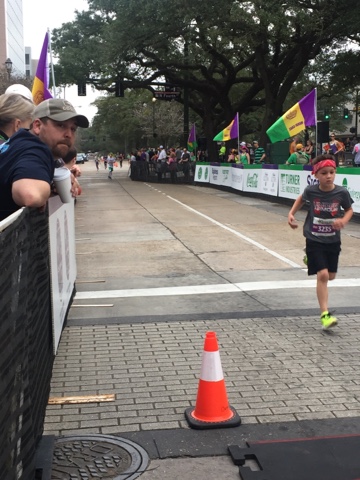 We were at the finish line cheering him on. He ran that mile in 6:41. That kid amazes me. If I only had to run 1 mi. & I ran as fast as I possibly could, I couldn't do in that time. He still has a problem with starting. He runs all out at the beginning. We've all tried explaining to him that he needs to start a little slower. 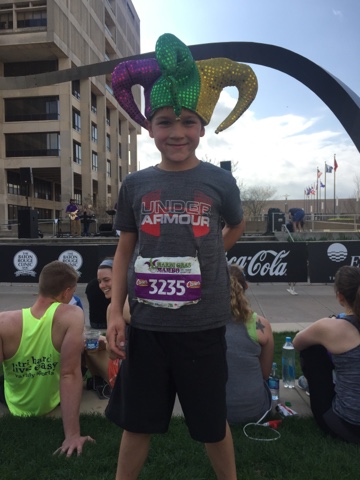 He was 2nd in his age group so he won the hat. 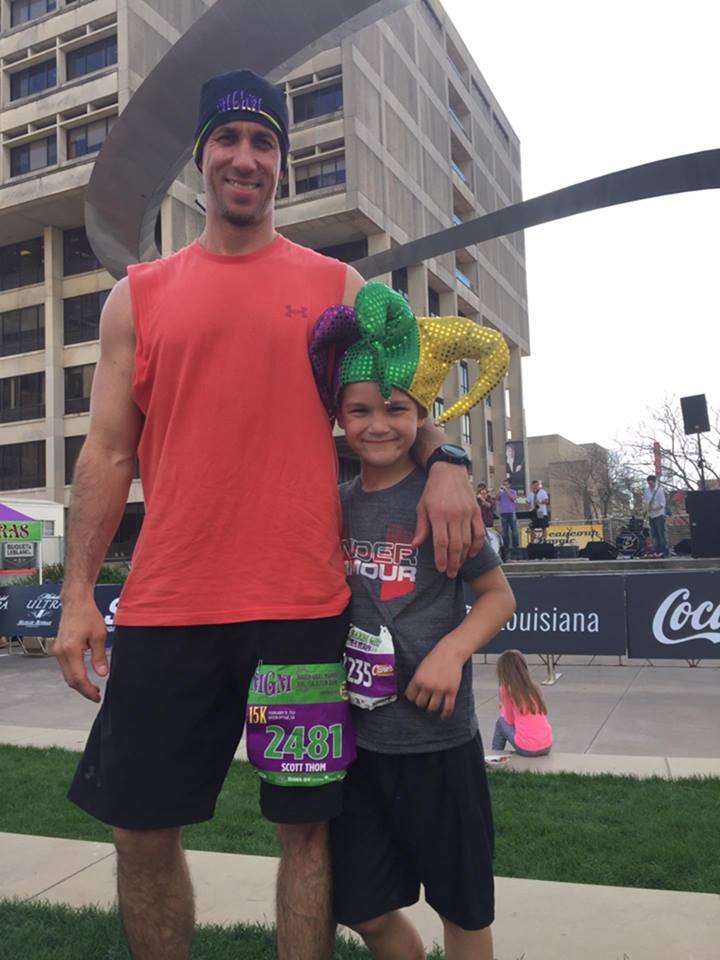 Scott was also 2nd in his age group. He won a beanie. 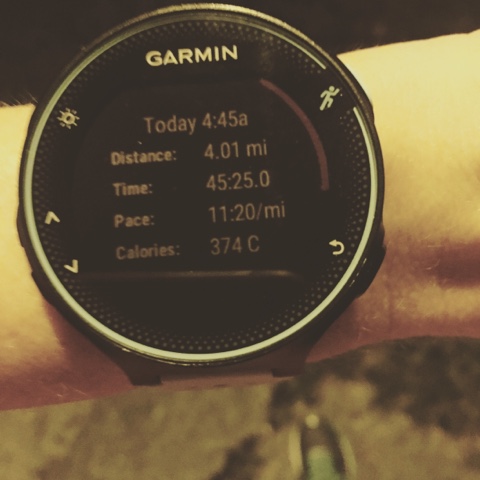 My legs were tired.

I got back out there Wednesday morning. It was cold & windy. Louisiana weather is the best. 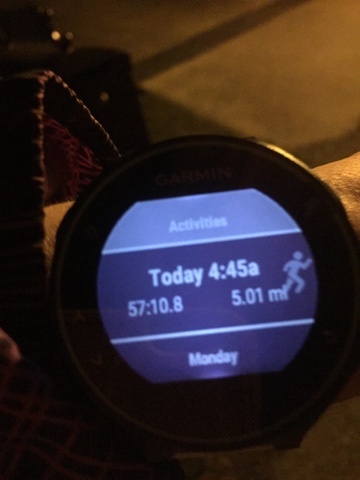 Friday when I got home from work Dean got a call from the insurance adjuster. Long story short, he thought we had the car. He called the body shop, they said we'd been notified that we could pick the car up Tuesday. Um no. We had not been notified. Monday rolls around & the body shop guy called & said  there was a problem with the rear air the previous week & they fixed that & he had a few things to do to it Tuesday but it should be ready to go Tuesday afternoon. Tuesday afternoon rolled around, there was a problem with the power windows so a replacement motor had to be ordered. Should be ready Wednesday. The problem I have with all of this is that at the beginning when he had to give the insurance company an estimate of the damages he was supposed to check EVERYTHING. Clearly, he did not. So, late yesterday afternoon he called & said it was ready. By the time Dean would've gotten there it would've been dark & he needs to check out the paint job so it's being picked up today. Hopefully. I have zero confidence that everything will be the way it's suppose to be.

Really happy it's Friday. That also means we're one week closer to tax season being over & having our early Friday's back. I HATE working until 5:00. Traffic is awful all of the time but leaving at 5:00 just makes it worse. When I worked at The Advocate I worked until 4:30. I had no idea just how much of a difference that 30 minutes makes with traffic. Tuesday it took 55 minutes for me to get home. Twice as long as it should. Last night I had to pick up race packets for the Mardi Gras Mambo Saturday. That meant I went home a different way. All that did was solidify that it's NOT the way to go home. 2 trains at the SAME intersection less than a minute apart. I don't understand how that's even possible.

Speaking of the Mardi Gras Mambo, I got an email from them saying that because I've been a past participant for several years I'm a VIP. HA! What exactly does that entail? VIP packet pickup last night with snacks & wine. Of course it just happened to be at our local Fleet Feet where there were sales going on so basically being a VIP cost me $50 because I bought a couple of running tops. I can assure you this will be the only time I'm ever a VIP for any sort of race. Or probably anything else for that matter.

The Mardi Gras Mambo has a 10K and a 15K. I'm running the 15K so I needed to do a longish run last weekend. 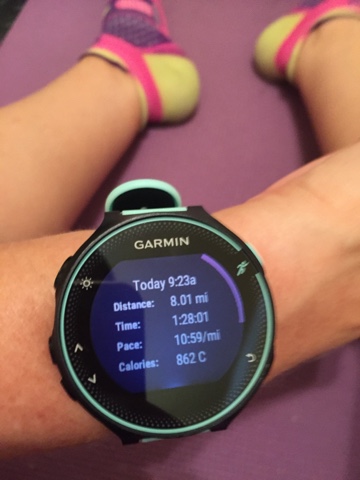 I did 8 miles Sunday morning.

Sunday evening we went down the street to a Super Bowl party. 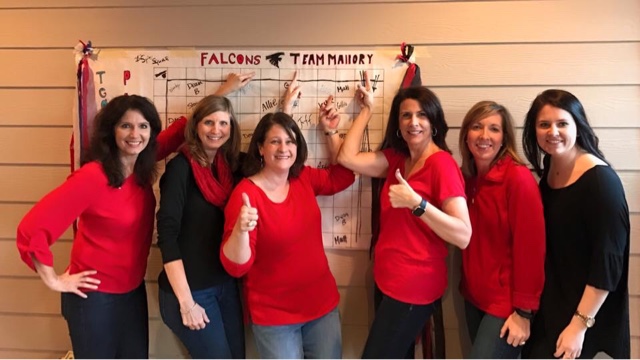 Can you tell who we were pulling for? We have a friend that is a coach for the Falcons. They lived across the street from us when he was a coach at LSU.

There were around 50 people there & each family brought something. There was a TON of food. 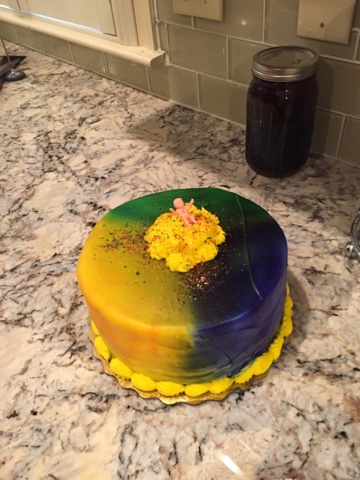 This was my favorite. It was just your basic yellow cake with butter cream icing decorated for Mardi Gras. I could eat butter cream straight out of a bowl. LOVE IT!

I didn't even set my clock to get up Monday morning to run because it was a later than normal Sunday night.

Monday night I woke up practically every hour so I turned the alarm off.
Finally, Wednesday morning I got up & ran. At 4:30 it was only 70 degrees with 90% humidity. So ridiculous. This weather is crazy. 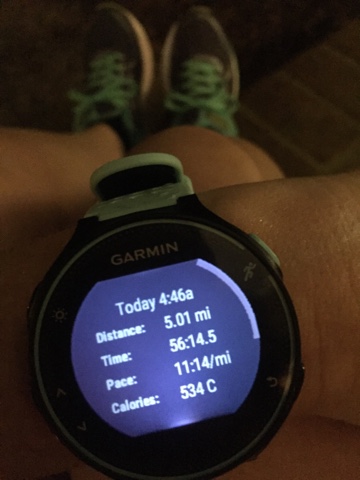 Last Thursday the owner of the body shop called Dean - that was a first - he told Dean "the plan" was to paint my car Monday & he "hopes" to have us pick it up Thursday. Guess what??? Today's Friday, a week later & I do not have my car. I'm not the least bit surprised. That whole "hope" thing doesn't exactly fill you with confidence in what he's telling you. I'm so over it.

It's Mardi Gras season in Louisiana which means there are balls every weekend. Friday night was Karnival Krewe de Louisiane. It's not affiliated with a parade but Debutante's are presented & all of the money benefits Mary Bird Perkins Cancer Center in Baton Rouge.

The 3900 Krewe was well represented. 2 of the girls were being presented so it we all went. 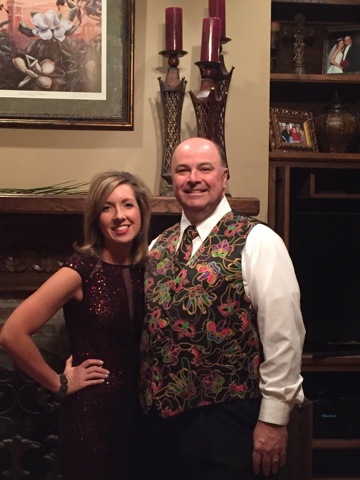 Each Debutante's mom was responsible for decorating the tables. 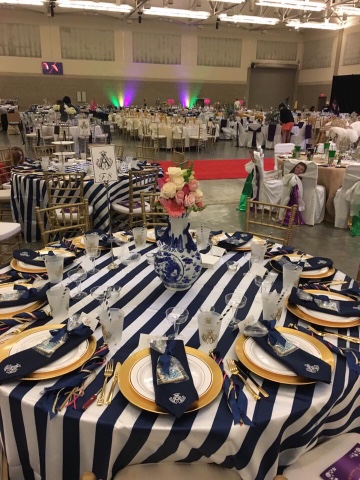 The first thing that happens is they introduce all the Royalty - King, Queen, Ball Captain, Dukes, Dutchess and then the Debutantes. They all parade down a red carpet while the MC tells all about them. Once all that is over there's a parade. It's not huge because we were inside but there were a couple of floats that the Debs rode on & threw beads. There were 2 high school bands too. 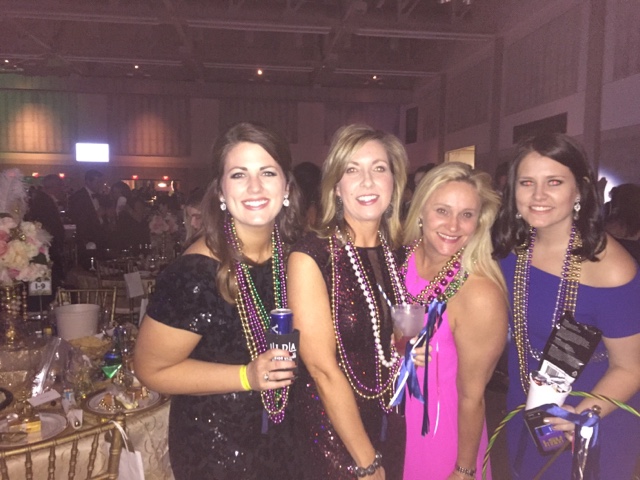 Parades aren't really my thing. This one was going ok since it was small & people weren't pushing & shoving but then I got beaned in the face with a handful of beads that someone neglected to catch. If you've never been hit in the face with beads, it hurts. I had a welt on my cheek the next day.

Once the parade is over the Band starts & there's dancing until midnight. 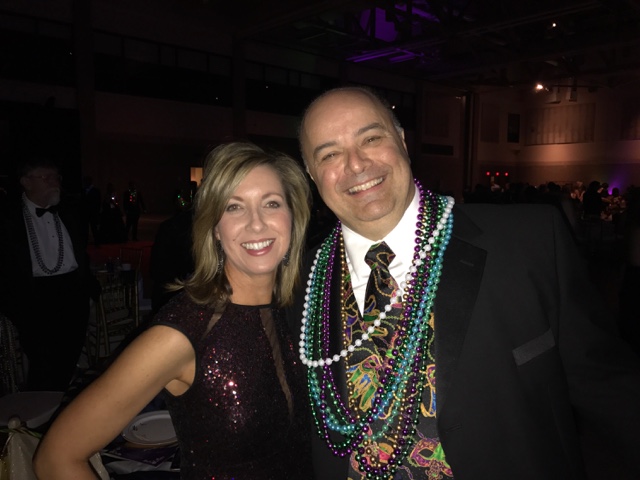 I had a spray tan which is why I'm not 45 shades lighter than Dean. 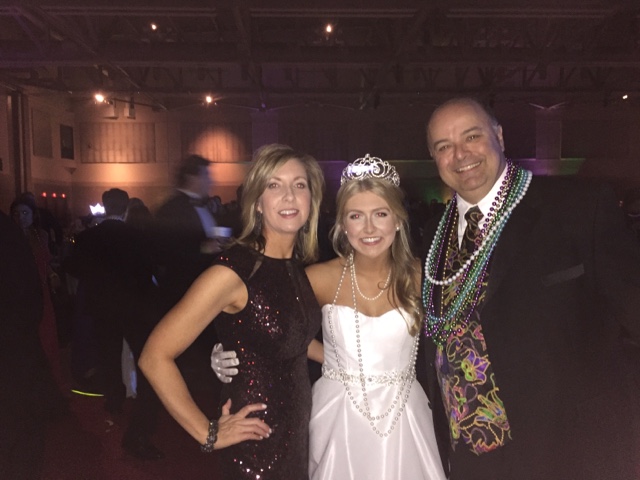 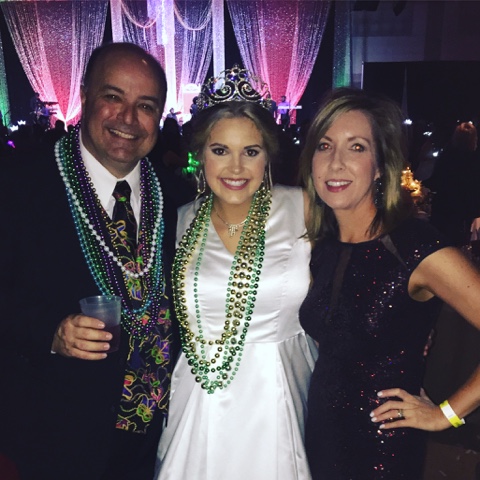 It's really hard to believe these two are old enough to be Debs. They were both little bitty girls when we met them. 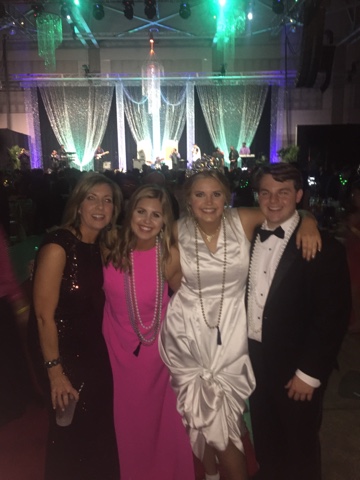 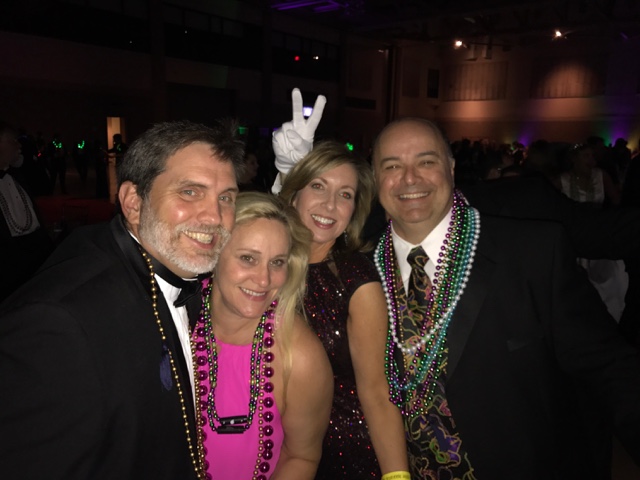 No, Dean isn't wearing white gloves. That's one of the dad's. They escort the debutantes down the red carpet & they wear tails & white gloves. 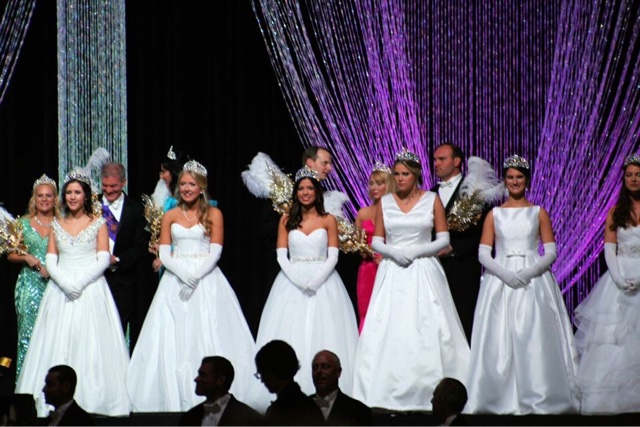 We had a great time.

Saturday, I felt it. Those 4.5 in. heels KILLED my feet. All was good while we were at the ball. It wasn't until the we got out of the car at home that I realized just how awful they felt. My back & legs also hurt Saturday & there was the welt. I honestly, felt worse Saturday than I did the day after I ran the Marathon!