Better Than The Louvre

In our house, one of us is extremely laid back & the other is extremely high strung. Care to guess which is which?? I'm the high strung one. I worry, I plan & worry some more. Why am I telling you this? I'll get to that. When we went on our cruise in January we met some people from Michigan.  One guy, Daniel, was originally from Tennessee & graduated from the University of Tennessee. He told us he was coming to town for the LSU/Tenn. football game. We've kept in touch via email & were looking forward to the visit. Throughout the week we had emails & phone calls from several friends that live out of town that were coming to town for the game that wanted to get together. As of Friday, there were no definitive plans. This is where the high strungness (is that a word?) comes in to play. I get nervous when I don't know what's going on. I like to have plans. The Friday night tentative plans were for Dean & I, along with our friends Cliff & Sheri that were on the cruise with us, to bring Daniel & his friend, Tiffany to eat at a great restaurant that's off the beaten path. At 5:15 we got a call from Daniel saying that they left New Orleans later than planned & were stuck in traffic. Yeh, I think we forgot to mention Friday afternoon traffic to him when he was making his plans. Anyway, Dean, Cliff, Sheri & I went & ate & made plans to see Daniel Saturday. Well, I say made plans. By that I mean that Dean & Daniel agreed that they'd talk Saturday morning & figure out a "game plan".  See what I mean about being laid back? We went to dinner & it was fantastic! The restaurant is called Roberto's & it's in Sunshine for those of you around here. It's a really old general store that has been turned into a restaurant. I had Grouper with a buerre blanc sauce topped with fried coconut shrimp. Ahhh, it was delish!!! We decided to have dessert. There were lots of choices but we decided on the blueberry bread pudding with rum sauce. It was GREATNESS!!!! Loved, Loved, Loved it!!! When we got home it was such a nice night we walked over & sat on the patio with some other neighbors.

Saturday, I wasn't feeling well so I dropped Dean, Daniel & Tiffany off at LSU. Dean played tour guide & brought them all over campus. They visited a lot of different tailgate parties & ate until they couldn't eat anymore. Everything they ate was something they'd never had before & they loved it all.  Dean was able to meet up with one of the other friends on campus for a quick visit. Tiffany told me later that Dean was the best tour guide she'd ever had. "He was better than my tour guide at The Louvre". HAHAHA!!! I laughed but she was serious.

Right before kick off I went & picked Dean up & we came home to watch the game. It was the most awful thing I've ever seen. The bad part? As awful as it was LSU WON!! Have I said it was awful? I was so embarrassed at how it all went down. Anyway, plans were made to have Daniel & Tiffany & some of the neighbors over after the game to eat & watch Alabama & Florida play. Dean fried fish, crawfish & french fries, crawfish stew & grilled redfish. Everything was so good. We were hoping our other out of town friends would be able to stop by but traffic wouldn't allow it. We live about 3 miles from campus so getting to our house after a game takes hours sometimes.

Today is Amelia-Ann's birthday so one of her friends that lives next door to us, McKenzie, baked a birthday cake. McKenzie is a fabulous baker! 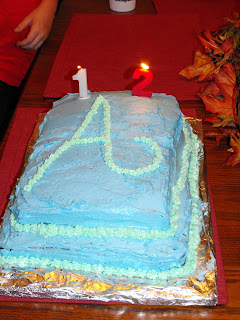 Amelia-Ann getting ready to blow out the candles. 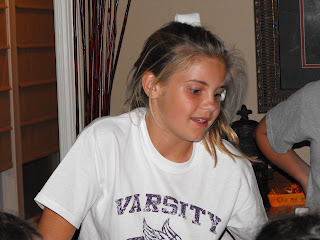 She's 12 now. I can't believe how fast time is going. Dean & I moved in our house a week after Amelia-Ann's family. She was 7 at the time & so little. We adore this little girl & I hate that she's growing up!
All the kids enjoying cake & gelato. 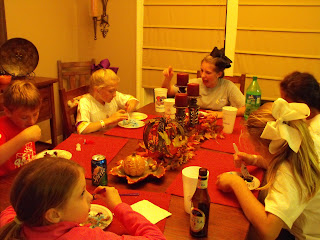 I promise the kids weren't drinking the beer!! 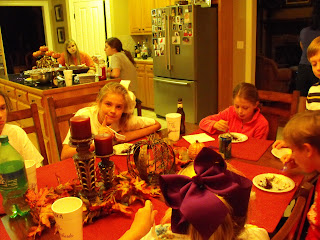 Amelia-Ann was worn out from the days festivities. 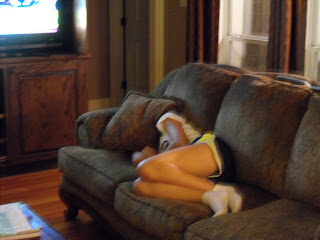 She was sound asleep under that pillow!

We had a great weekend & as usual it was too short.