My camera came in the other day! WOO HOO!! I was excited. It took forever! Anyway, it's here & so far I really like it. The only pictures I've taken were of stuff in the living room while I was laying on the sofa watching TV. I did load the software on to my computer, get the battery installed & set the date. I had every intention of reading through the manual to figure out how to work it but of course it doesn't have a manual. Just a quick start-up guide. To read the manual I have to go online. I hate doing that. Oh well, I'll give it a try.

I was surprised to see how small the camera was. I knew it was going to be smaller than what I had but this thing is smaller than my iPhone! 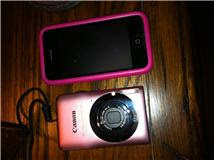 It's PINK too!!! How cute is that?? This thing is going to be great! It will fit in a pocket! Now I'm on a mission to find a cute little case for it. I can't carry around a camera as cute as this in an old ugly black case can I??

Moving on. Thursday night Dean & I joined Cliff & Sheri at a wine tasting. It was a fundraiser for Boys Hope/Girls Hope of Baton Rouge. The wine tasting was at Texas de Brazil. There was wine, wine, wine & appetizers. There was this one that was advocado on a cracker thingy with a boiled shrimp on top. DELISH!!!!

Dean & I were both off Friday. We went to Lowe's & Sam's. I LOVE SAM'S!!! Seriously, love love love. I know some people wouldn't be caught dead buying clothes at Sam's, but I'm not one of those people. I found these flip flops. They are some of the most comfortable shoes I've ever put on my feet!! The were marked down to $9.71. Can't beat that!! 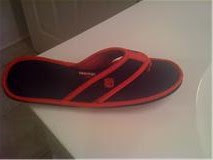 Sam's always has name brand clothes. This sweater is Kenneth Cole & it was $18. 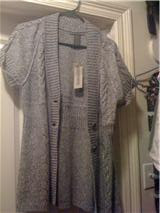 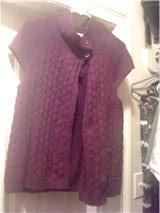 After Sam's & Lowe's, we had lunch at DeAngelo's. They have really great pizza & the slices are huge! 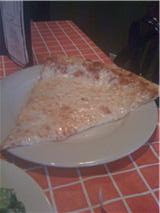 My favorite is the Cheesy Italian. Sooo good. This morning I got up really early to go have my hair cut & highlighted. I'm really happy I was able to get that done. My hair was getting a tad flat & I don't do flat hair.
The rest of the afternoon was spent working in the backyard. Ugghhh!! Note to self, when you want the entire backyard landscaped remember that means the entire backyard will need to be weeded & re-mulched. Dean did the front yard Thursday when he was off. 13 bales of pine straw later he was finished. We put 20 down today in the backyard around the pool. We still have 2 beds to go but they're not really big so it shouldn't take long. Thankfully, the weather was somewhat cooperative. It was only 77 when we were working.
We went to Mass this afternoon & then stopped at Mike Anderson's to eat. Seems like we did an awful lot of eating this weekend. Anyway, it was delish as usual. We had a group of 18 high school kids sitting next to us. They were going to homecoming. One of the girls had on the most AWESOME pair of shoes I've ever seen!! I refrained from asking the 15 yr. old where she got them but oh they were greatness. Gold glitter heels, ribbon, GREATNESS!!! I think I'm suffering from shoe withdrawals. When I was going to Communion the lady next to me had on a fabulous pair too! The pair of flip flops I got at Sam's are the first pair of shoes I've bought since I can't remember when. I haven't bought a purse since Christmas either!
So, now we're home watching this sorry excuse for a football game. LSU is winning but this is one of the most boring games I've ever watched. I'm thinking tomorrow is going to be a day filled with a whole lot of nothing!!
Toodles!
Posted by Traci at 8:50 PM