I've mentioned that Patrick Dempsey is in town. I haven't seen him yet. My neighbor has some friends that did see him in the parking lot at Sullivan's. They took a picture with him & put it on Facebook. It's a great picture.  It brings me to this question, why why why are the 16 yr. olds the ones that actually run into him & get a picture? He's 44 years old. He's old enough to be their dad & he may even be older than their dads! Shouldn't they just stick with Taylor Lautner? He's in town too. I've liked McDreamy since he was in Can't Buy Me Love in 1987! I can see this is going to be a Jessica Simpson ordeal all over again. She was at Albertson's, she was at Walmart, she was at WalkOns, she was at Shucks. Yet the only time I saw her was when I stood out in the cold the day before Thanksgiving to watch her film a scene for The Dukes of Hazzard & when I saw her pulling into the driveway of the house she was staying in. Well, actually, I didn't even see her then because the body guard was driving & the house had a garage. Don't ask how I knew where she was living or what I was doing near the house when she pulled in. (Thanks US Weekly). I have another question for the 16 yr. olds. What are they doing eating at Sullivan's??? I didn't eat there for the first time until I was like 26 & that was for my birthday. For those of you that have inquired about pictures when I track down McDreamy, there's no need to worry.  I will get some!
Here are some pictures of the cute little one from Sunday. 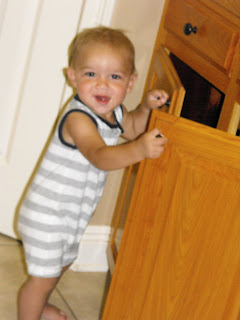 He always goes straight for the cabinets. He loves to bang them. We also discovered yesterday that Logan has a better tan than me. Imagine that.
If anyone was wondering how hot it's been, here you go. 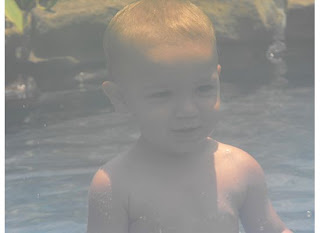 This picture looks like this because I walked out of the cool air conditioned house with my camera & immediately the lens fogged up & I didn't know it & took the picture.  I think it's still a cute picture! 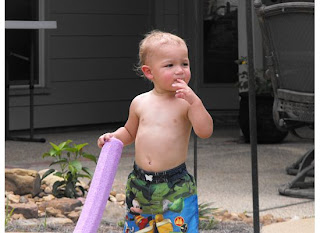 All of the noodles we have have pieces bit out of them. It's the strangest thing but every kid that comes swimming chews on a noodle. SEVERAL times I had to dig pieces of noodle out of Logan's mouth. FYI - his teeth are sharp!!
Anybody watch Real Housewives of New Jersey this week? Danielle is CRAZY NUTS!!!
Toodles!
Posted by Traci at 2:08 PM