After work today I went & had my nails done. It was time for a new set & it took forever. I'm not sure why but i was there almost 2 hours! The people are really nice so it was ok. I saw the little lady that sits in front of me at Mass every week. She was "working" there. I say "working" because she told me she had no idea what she was doing but the guys asked her to come help out because someone called in sick. She's really funny!

Mike, the guy that did my nails, is a joke teller. To me the funniest joke is that this Vietnamese guy that barely speaks english goes by Mike!!! He told jokes, I laughed. It was much better than sitting there listening to them speak to each other in their language. Then a cute little Drew Barrymore look alike came in & talked my ear off. She'll be 20 July 5th, she works at Victoria Secrets & it's her first job. FYI - the girls at Victoria Secrets don't work on commission. Shocking, since they attack you multiple times while you're in the store! If anyone's looking for a second job or maybe just a first part-time one, I recommend Victoria Secrets based on Carrie's info. She gets a 30% discount & every time they come out with a new bra she gets a free one so she can give an "honest testimonial".  Carrie also lives in my subdivision & is meeting her boyfriends parents & grandparents for the first time tomorrow. She's quite nervous. Carrie's mom was at home sleeping. She had a procedure for the veins in her legs. I told you Carrie talked my ear off!

When I finally got home we veered from our normal Friday routine of going to dinner. We ate left overs & spent the evening in the pool. I use the term pool loosely. As hot as it is, it almost felt like a hot tub. It was definitely hotter than the hot tub on our cruise in January. We had these too. 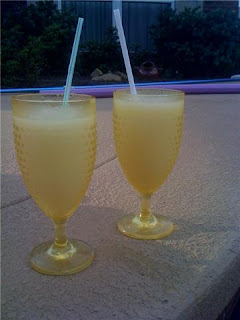 I love Pina Coladas!!!
I have friends that are in New York this week. They've been texting & emailing all week making me jealous! Tonight they were at the New Kids On The Block concert at Radio City Music Hall. So cool. Well, being the good friends that they are they called me when little Joey Joe was singing Please Don't Go Girl & at the end when they sang Hangin' Tough. It was delightful. Much to Dean's chagrin, I put it on speaker phone & was able to hear & sing along. Oh how I wish I was there with them. Maybe next time.
I'm super excited because one week from tomorrow I'll on a plane to San Diego!! So so so excited!
Have a great weekend!
Toodles!
Posted by Traci at 9:45 PM