GEAUX TIGERS!!!! What a game they played last night! It was a little too stressful for me but finally in the bottom of the 11th with 2 outs & 2 strikes they won! What's that mean?? According to Irvine's Coach, Gillepsie, "it was bad karma". Yeh, you know what they say about Karma.  It also means we play UCLA tonight at 8:00. It's going to be a late night. We watched yesterday next door at Cliff & Sheri's & tonight we'll be down the street at Jackie & Dennis'.

After the game we set up for the garage sale. Sheri was having one & invited us to put stuff in it. After all the rain yesterday & the forecast of more today, I was having second thoughts. The thought of getting up at 5:30 surely didn't help matters. I sucked it up & I'm glad I did. I made $170 & got rid of some stuff. Thanks Janice! She showed up & started pointing at stuff saying "I'm getting that"! She bought a couple of watches & when my friend told her that they all work, they just need batteries her response was "OH I don't need batteries, I just wear them"!! Soooo funny!! She went to get the lady she works for because she didn't bring enough money with her. When we helped load her car we also realized that she needed the ladies car because hers was full! Apparently, we weren't her first garage sale of the day! There was a brief moment when I felt a little guilty that I may be contributing to a hoarder but what can you do?


This is Dean on pool duty. 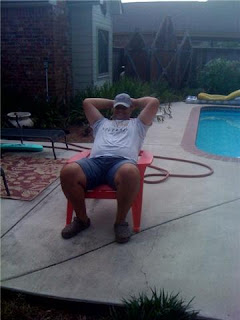 We thought it would be a good idea to have someone in charge of making sure nobody drowned. There was only one close call. Eddie was very interested in the pool & he didn't listen very well. When his mom wasn't trying a purple wig on him, he managed to break an exercise bike. We were happy to see Eddie go. These two had to go inside because they couldn't control themselves & were laughing at how bad he was. 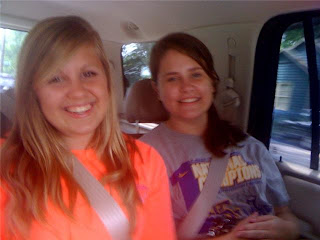 Speaking of karma, I'll remind them of this one day when they have a bad little boy!!!

Not to change the subject but I found out that McDreamy is in town & has been spotted at Whole Foods & Sullivan's! He's here, along with Ashley Judd, filming a movie. I've got people working on finding out where he's staying.  Oh how I would love to take a picture with him.

We're off to watch the game. GEAUX TIGERS!!!!