Friday night was my last birthday dinner of the year. The girls & I went to Monjuni's. It was soooo good. Thanks Vicki! We had such a good time. Here we are. 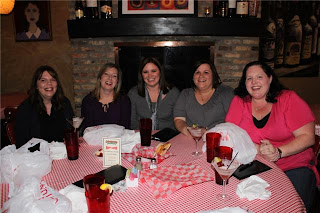 Wendy, Me, Vicki, Allison & Jill. The waiter didn't know how to use Vicki's camera which is why we were laughing. I'm guessing he wasn't born when you actually had to look through a viewfinder.

Saturday the game was closer than I thought but the outcome was the same. I did get to see Lil Nicky throw a couple of fits but that's about all there is to say about that.

Sunday was Cody's birthday party. All the kids seemed to have a good time. It was good to see everyone although the kids were completely oblivious that we were there. Note to self - next time we're invited to a party at a jumpy place don't get there until time to open presents & eat. We stopped by the St. Aloysius Fair on the way home to check out the raffle. We were hoping to leave with $10,000 but it didn't happen. Oh well, there's always next year.

Then came Monday, WOW! I left my house about 6:45 in the morning to meet Allison at Cracker Barrel. We were spending the day at Market in New Orleans. We learned a lot of lessons the last time we were there. The first being to either eat well before you go or bring sandwiches. The food they sell at the convention center isn't that great & it's ridiculously expensive. Since I only eat sandwiches immediately after they've been made that meant we had to eat before we got there. We had a lovely breakfast & then off we went. The second lesson we learned was to take a picture of the level we were on in the parking garage so that we don't have to ride up & down the elevator looking for Allison's truck. That brings me to lesson #3 - go in my truck not Allison's. She has a nice size SUV or so we thought until we tried to get the "big ass picture" (which will now be known as the bap) in it. So, we've had a good breakfast, know we're on lower level 5 & have my Expedition. We're ready to shop! We got some great deals & some Christmas gifts but as in the past there were people and/or things we forgot to buy. The thing about Market is a lot of the booths have the same stuff but some at better prices than others. We're always leary to buy at the first place we see for fear we'll find it cheaper. We were beginning to get a little discouraged. We'd been shopping for like an hour & we hadn't bought ANYTHING! We did however make up for it in hour #2. That would be when we came across the pewter booth. I LOVE pewter serving pieces! I don't know why but I do. I was able to find a platter that matched the bowl I bought last year. Thank goodness you can bring all of your stuff out to the lobby & check it with the little mexican ladies for $3/bag. I don't know what we would do without that. Then we came across the bap booth!!! I love it. They have such pretty pictures & frames. I found one for our bedroom. We actually found a few that we liked but we eliminated one because the birds' eyes were evil & being that it was going in my bedroom I was afraid they'd oog me out & make me think they were following me. iPhones are wonderful inventions. I was able to take pictures of the other 2 pictures & email them to Dean so he could make the final decision. He picked the one I knew he would which just so happened to be my favorite of the two. While looking through the pictures we came across this one. 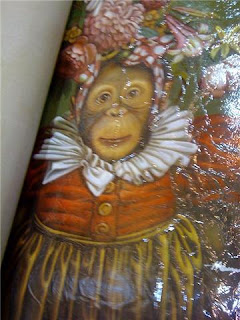 Doesn't it look like a monkey dressed like Aunt Jemima?? People probably thought we were crazy but me & Allison thought it was hilarious!

This is the one I got. 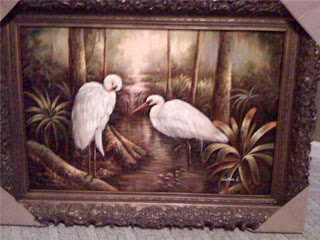 Aside from shopping, Allison was able to see first hand how weird things happen to me that I have nothing to do with & most of the time it has something to do with people of a Nese descent. It ranged from dirty looks to people thinking I worked there. People asked me questions & when I answered them they gave me dirty looks. It was crazytown as Allison would say.

Speaking of crazytown. We're shopping & we keep hearing this zapping sound. We couldn't figure out if one of the booths that we hadn't made it to were selling bug zappers or if there were actual bugs being zapped in the flourescent lights. Imagine our surprise when we discovered that it was neither. What was it you ask??? A STUN GUN! Seriously, they were selling them. It's a shame I didn't see that right when we came in. I would've loved to use it on that Nese lady.

So then it was time to pick up the bap, much to Allison's chagrin. We had a plan this time though. We were already starting off better than last time because the booth was close to the front of the convention center rather than all the way in the back. While I was waiting for the guy to get the bap another lady was picking hers up. I couldn't believe my eyes - she was buying a smaller version of Jemima Monkey!!! She looked like a perfectly normal lady. Weird. I left Allison outside with all of the goods & I went to get the truck. We could've bought a lot more stuff with all the room we had left. Oh well, maybe next time.
Posted by Traci at 5:30 PM