Thursday night I went to the Junior League Informational meeting. It was just down the street from my office so rather than go home after work & come back I went to the mall. I took care of a couple Christmas gifts & picked up a few things for myself. Of course everything was on sale & I had coupons! I bought myself 2 sweaters, a pair of shoes & the 2 Christmas gifts & I only spent $45! The shoes were my best deal, they were marked down to $9.97 & after the coupons they ended up being $8.50. Here they are. 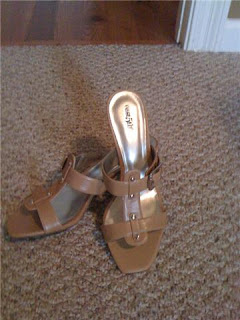 Now, I think these are really cute summer shoes & I actually don't have any that color BUT there was another pair of chocolate brown ones that I LOVED! They were also on clearance for $9.97. Imagine my disappointment when the shoe lady came out from the back to tell me that she couldn't find the other shoe. REALLY? How do you lose a shoe when it's kept in the box in the back? Maybe it was God's way of telling me I really didn't need another pair of shoes. I know I didn't need another pair but really who buys shoes because they actually need them? Not me! It's all about want. Dean wasn't really excited about another pair but they were $8.50!!! He says my shoes are taking over the closet. Speaking of the closet, apparently, there was an incident the other day & Dean almost broke bones as a result of my shoes.

Because it took so long for the lady to try & find the other shoe I ran out of time before I could look around more so I went back Friday at lunch. The coupon I had was good thru Saturday. I was able to knock out several more Christmas gifts. It looks like the only things I have left to get are toys for some of the kids & the dads stuff. All of that is easy. I just have to psych myself up to go to the toy store. It's not my favorite place. I think I'll probably try Target first & leave Toys R Us as a last resort!

Dean went to his parents house after we had dinner Friday night because he was going fishing with his dad early yesterday morning. After he left I spent the evening catching up on all the stuff on the DVR while I glued lambs together. I got more than half of them done. This is what the finished product looks like. 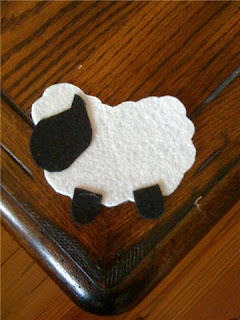 I don't think they're very cute but I didn't design them. I just put together what was given to me.

I spent pretty much the entire day yesterday cleaning out closets. I can't believe I'm going to put this picture up but this is what our closet looked like before. I had already started taking clothes out that I was going to donate before I remembered to take the picture. 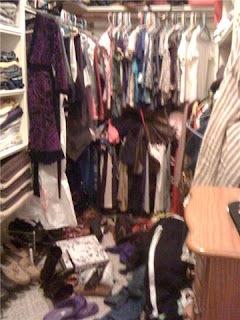 Yeh I know it's really really bad. Mrs. Joyce, please remember that this is not a reflection of me as a person. This is part of Dean's side. 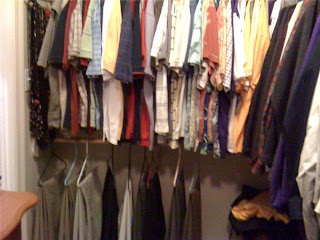 He's really really neat! One day I'll have to show how neatly he folds t-shirts!

I have 3 huge black garbage bags filled with clothes, shoes & purses to donate. I'm donating 9 pair of shoes & that leaves me with 46 pair. I think I need to buy 4 more pair so I can have an even 50 don't you? I'll need another shoe rack though. 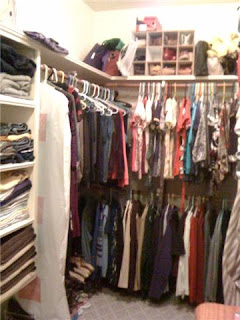 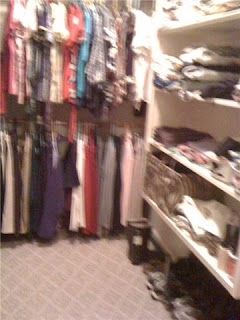 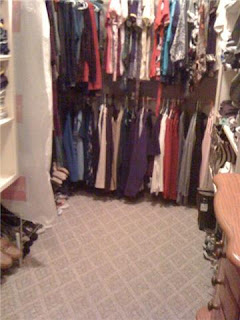 It's really nice to be able to see everything & not have to worry about stepping on anything!! I'm going to keep it this way because I DO NOT want to spend another Saturday cleaning it.

I also cleaned out one of the extra closets. It's very neat now but the space I freed up is now full of Christmas gifts. Which is why there are no pictures. You just never know who's reading!

I also finished the lambs while we watched that sorry excuse for a football game. I think LSU must be the worse 8-2 team in the country.

Since I did so much yesterday I'm rewarding myself with a lazy day today! I watched the Saints & was totally aggravated because Colston did nothing again. It looks as though No Thugs is going to lose to the other girl. Losing to Allison & Jill is one thing but this girl thinks we're stupid & don't know anything. You should've seen the way she looked at us during the draft. We were there to socialize first, draft second & this girl wasn't amused by that. Oh well.

I guess I need to start mentally preparing myself for another Monday.
Posted by Traci at 3:59 PM