I Will NOT Play Farkle

I mentioned before that I was invited to join a "real" book club. I was leery of the first book after I received an email from the lady that started the club. She sent it to everyone apologizing for the book choice & how she hopes it didn't offend anyone. She said it was recommended which is why she chose it. I looked up the book online & decided I definitely didn't want to buy it so I put it on hold at the library. There was a picture of the cover online but I guess since it was small I didn't pay a lot of attention to it. This is what I saw when I picked it up at the library. 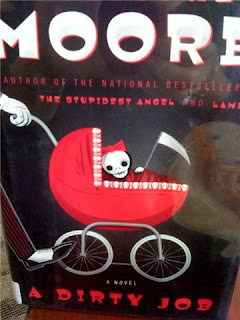 If this wasn't for the book club I would've never even attempted to read it once I saw the cover. I do judge a book by its cover. What kind of freak puts a skeleton/alien/grim reaper thingy in a stroller with a bow?? There's just something wrong with that. I don't like to read anything that I don't believe could happen which is why I have no desire to see any of the Twilight movies. I went completely out of my comfort zone & read all the Twilight books & really enjoyed them but I just don't want to watch them. I'm Team Jacob by the way. The whole black hair, pasty white skin thing is not the least bit attractive to me. Anyway, I started this book at least 2 weeks ago & I've only read 100 pages. I normally read fast so this is really unusual for me. I haven't been reading as much as I usually do because thanks to my mama I'm obsessed with playing Bejeweled. Yes it only takes a minute to play a game but when you play like 100 games in a row it takes up some time. As if that wasn't good enough now she wants me to play Farkle. It's NOT HAPPENING mama!!!! I will not cave to the pressure like I did with Bejeweled.

So I've taken a break from the book. My friend Jackie has already read it & she said that it's good & I'll want to see how it ends. To be perfectly honest at this point I couldn't care less how it ends. It's pretty depressing too & I really don't want to read about depressing stuff. There's enough of that in real life.

Suffice it to say I think I'll enjoy the "worst book club ever" a lot more than the "real book club".

Toodles
Posted by Traci at 7:35 PM