When I woke up Saturday morning my leg was better. Notice I say better, not good?? I was worried that there would be problems. I DID NOT want to this to screw up my day. We had great seats & our friend was bringing us in the locker room. I sucked it up & put on my tennis shoes. I don't wear tennis shoes just anywhere. Generally, they're for working out & maybe the occasional running around. Me leg felt amazingly better when I put those shoes on. Of course wearing them required that I change my whole outfit. Not that it was anything special to begin with but still.

On our way to LSU we stopped & did our civic duty & voted then it was off to tailgate. The more we walked the better my leg felt. I was so relieved!!

Dean & I have a friend that works in LSU's Athletic Dept. so we were going to get to go in the locker room. We had to be there early which was fine with us. LSU was wearing their Nike Pro Combat uniforms for this game. I'm not crazy about the white helmets but they did have these iridescent like tiger stripes on them that was cool. Of course that doesn't show up in the picture. 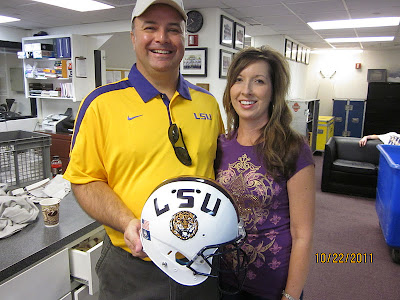 This is the door that the players run out of onto the field. 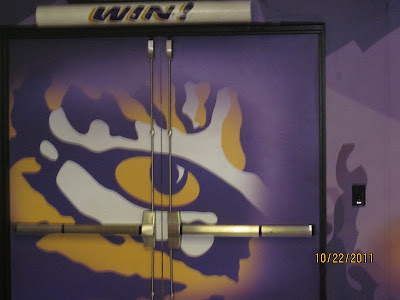 The "Win Bar". The players touch it as the run out. 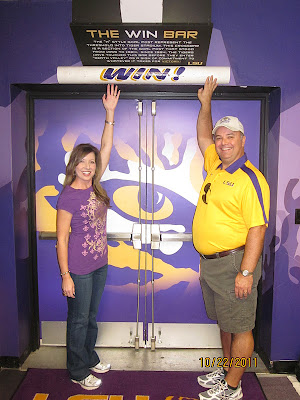 I could barely touch it even with my freakishly long arms & big hands. 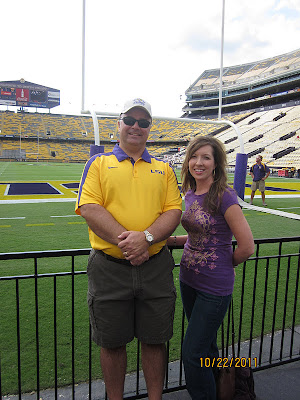 Dean & I & some random dude in the background. 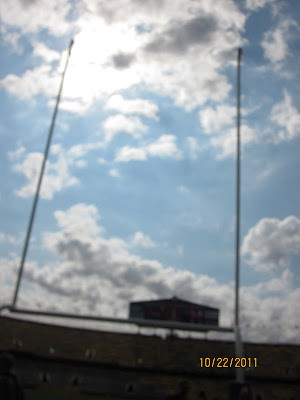 The North End Zone. Wasn't it a beautiful day?
After the tour it was back to tailgating. We met up with our friend that we were sitting with & another of Dean's friends. We visited several other friends which meant a TON of walking. We ate fried fish, boudin balls, brisket & shrimp pasta. It was another 2:30 game. For those of you that don't know, LSU fans HATE day games. I for one, was very happy with the day game. I had time to tailgate, go to the game, get home & still be in bed for 10:00. HA! Anyway, there are no night SEC games in Tiger Stadium this season because we're so good. HAHA! Seriously, we're good so CBS wants to televise all of our games which means 2:30 kickoffs. There was the one 11:30 kickoff which the fans really, really, really hate. Our friend Kevin drives in from Orange, TX for all of the home games & he has AWESOME tickets. He has 4 seats & normally his family comes with him. Only his daughter Montana wanted to come so he invited us along. We were sitting between the 45 & 50 yard line, 19 rows up. I LOVED these seats!! 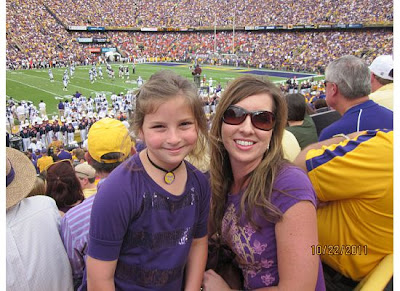 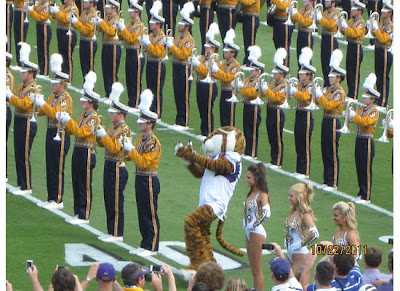 The Golden Band from Tigerland pregame. Pregame is my most favorite part of the whole game experience. 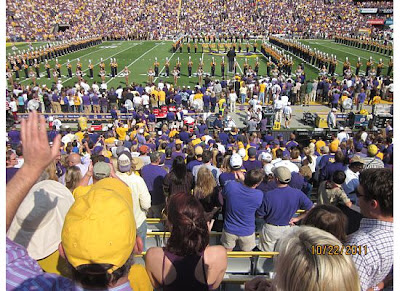 The band always spells out LSU at the end of pregame. 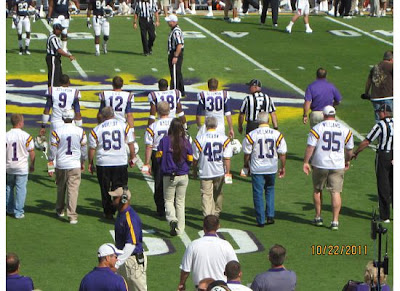 All of the captains for the game. I have serious issues with 9 being a captain due to off the field issues but that's another post. 9, 12, 18 & 30 are current players. The second row of "players" are past players that were the guest captains for the week. 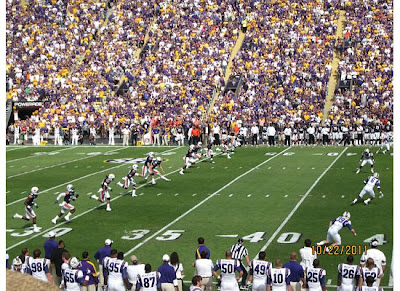 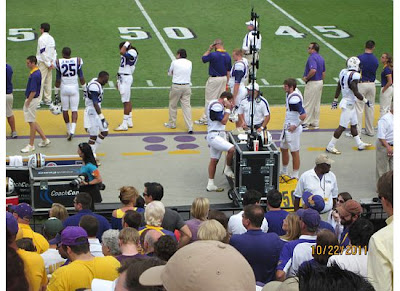 Jarrett Lee (our starting QB) on the phone talking to the booth. I loved being able to watch all the hoopla on the sidelines. Those little purple circles aren't part of a Twister game. It's for the special teams guys to stand on so they know there will BE enough people on the field. 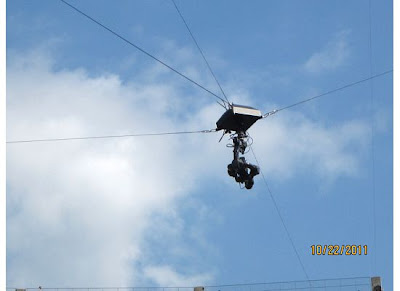 This thing fascinated me. If you watch any games on tv you've seen it. It's a camera. I zoomed in close & I should've taken one not zoomed in because the cords are attached to the bottom of the upper deck & this camera zooms all over above the field. It's really amazing. It's worked by some sort of remote. Very interesting.
LSU won 45-10. It was a great game!
Needless to say I was tired yesterday. Aside from going to Mass & the grocery store I got absolutely nothing accomplished. Well, except for reading!! Oh & I put a pork loin in the crock pot & used a McCormick Crock Pot Pulled Pork seasoning pack. It was good. We'll be having leftovers tonight. There was also no exercising going on yesterday. This morning I ran for 38 minutes before work.
Toodles!
Posted by Traci at 3:28 PM