Hard to believe isn't it? I love the month of October. My anniversary is tomorrow & my birthday is at the end of the month. Lots to look forward to.

Friday night we went to the wine tasting. There were 4 couples & we had such a good time. We also drank entirely too much wine. There were 7 wines featured. The 7th was DELISH, my absolute fave. Sadly, it was like $150 a bottle. Needless to say we didn't bring any of that home. The meal was delicious too. We had blue cheese stuffed mushrooms. SOOOOO good. Turkish lamb stew, which I was leery about, but was also really good. The main course was prime rib & olive oil baked potatoes with chocolate butter cake for dessert. The wines are always discounted at these dinners so we usually buy some of our faves. There's also an additional discount if you buy 6 or more. This is some of what we bought. 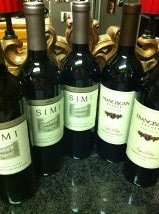 We ended up with 7 bottles. I just realized something. Anytime, I buy more of something than I need due to a discount Dean says I'm "spaving", spending to save. He makes fun of me for this BUT he did the same thing Friday night!!! HA!

So after the dinner we went to Marcello's. It's a small restaurant & bar that's really good. We just stopped in for a drink. I had a wedding cake martini & it was delish!! Good thing I had the recipe in my phone because the bartender didn't know how to make it. 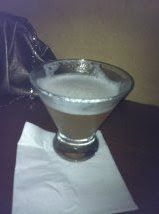 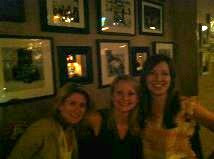 Suzy, Korie & me. It was really dark so it was hard to get a decent picture.

Saturday morning I woke up bright & early at 6:15 & couldn't go back to sleep. It was awful. I also had a headache. Imagine that. I went for a walk & then came home & did Bethenny Frankel's  Body By Bethenny Yoga DVD. I borrowed it from my friend Wendy to see what it's like. I've never done just regular Yoga so I wasn't sure what to expect. It's very similar to the yoga portion of Yoglates. I liked it & it was more low key than what we do in class so that was nice on a off day but I probably wouldn't do this one again. I'd rather do something different from my regular routine.

I laid on the sofa the rest of the afternoon watching the LSU game. It was dullsville but they won. After the game we went next door for Amelia-Ann's 13th birthday party. I had my first "gourmet" cupcake. I never understood what the fuss was about but OMG I do now & I've been missing out. They were soooo good!!! I had wedding cake. DELISH!! Hopefully, it won't affect the scale too much this week. I just couldn't resist.

Yesterday, we went to 7:00 Mass & when we got home I ran. Week 8 Day 1 is 28 minutes straight. It was tough but I did it & I increased my time by over a minute. I don't know if that was a fluke or if I really am improving since the weather is cooler & less humid. I guess we'll see tomorrow when I do day 2. After my run I parked myself on the sofa again. I didn't sleep great again Saturday night & I was planning to go to Yoglates later so I took a little nap & read & watched the Saints. I brought Korie & Suzy to Yoglates with me. They'd never tried it & didn't know what to expect. Let's just say they have an all new respect for me & what I've been doing. I got a message from Korie this morning that just said "OWWWW". That pretty much sums it up!

Did y'all have a good weekend?