I had to post a pic of this cute little extra bed we had in our room. 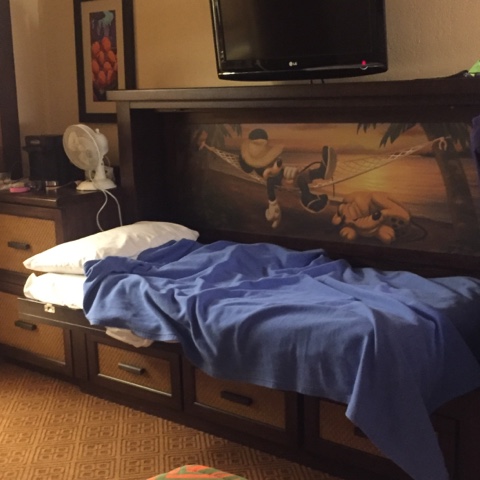 It folds down from the wall & when it's closed it just looks like a piece of furniture & you don't know it's a bed.

We managed to sleep until 10:30 Saturday morning. Our goal was to sleep a lot so we wouldn't be tired for the race. We headed to Downtown Disney to have lunch at Splitsville. 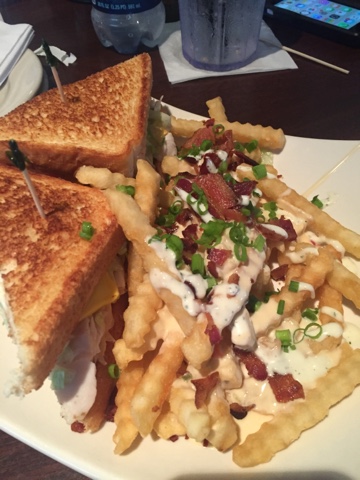 Of course I said yes when the waiter asked if I wanted to upgrade my regular fries to "loaded" fries. Why isn't this an option everywhere???

After lunch we grabbed a drink at Starbuck's (they're all over the place in Disney - it almost made up for the fact that there's no Dr. Pepper. Almost.), checked out a running store & headed back to the hotel to relax. Splitsville is on the opposite end of Downtown Disney from where the bus stop is. Don't let anyone tell you there's a stop by the parking garage. That was in only for off property shuttles. Since we were trying to rest our legs & feet & Cindy sounded like an 85 year old woman who's been smoking her whole life we weren't really into hoofing it all the way back to the bus stop. Once again, that's where Uber came in. I can't brag on them enough. Pulled up the app & someone was picking us up within 2 minutes. Since we'd used Cindy's free ride that she got with my referral, I had another free ride so we used it. Another good thing about it, is that the Uber driver drops you off at your building, not the bus stop.

Once we were back at the resort we just hung out in the room & ended up taking a nap. 2 hours later we got up & started getting ready for the race.  There were special buses bringing runners to the Wide World of Sports Complex where the starting line was. 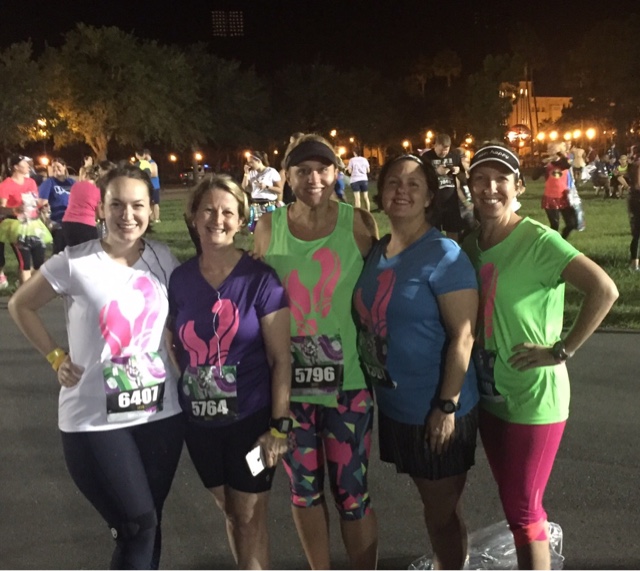 We were ready to run! It was HOT. Like really hot & really humid. All of a sudden there was a nice breeze & everyone was commenting on how good it felt & then someone uttered the dreaded words - I think a storms coming. NOOOOOO. Well, a few minutes later it started raining but it only lasted a few minutes. Thank goodness! 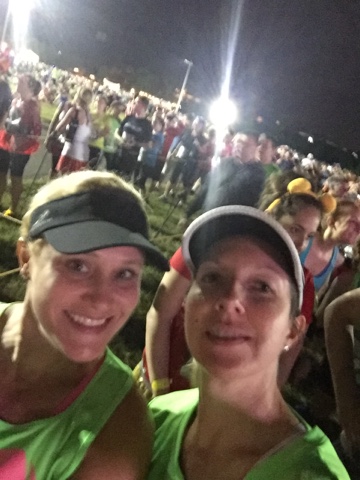 We took a ton of selfies! 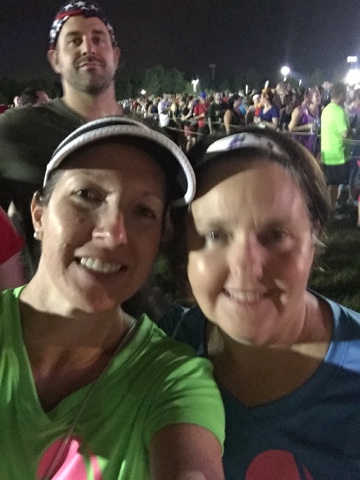 We were supposed to be in our corrals by 9:15 for the 10:00 start. We got there around 8:00 to make sure we weren't late. A stage was set up with basically a host who would lead dances - the chicken dance, macarena, the wobble, etc. Surprisingly, there was no whipping or nae nae'g. It was pretty funny. They interviewed people in the crowd & we got to see a guy propose to his girlfriend who was COMPLETELY shocked! It was great!

There were some characters taking pics. 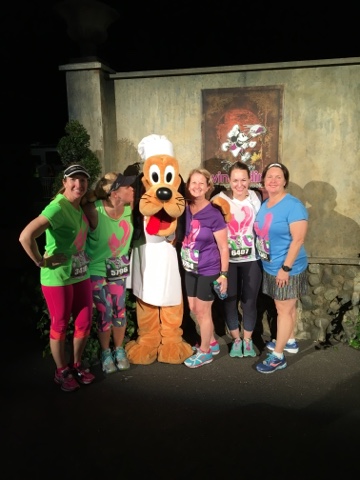 The lines were soooo long but they moved pretty quickly. 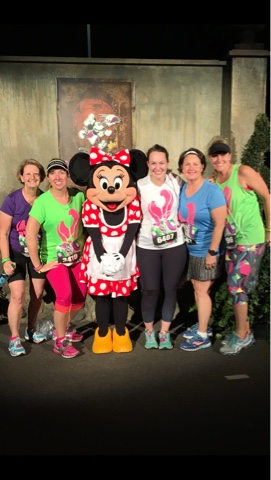 We were one of the last groups to take a pic with Minnie.

Next up was what I really didn't want to do - get in line for the porta potties. YUCK!
There were about a million of them I swear but the lines were still long. Cindy & I were the only ones that needed to go. Normally, I would skip the bathroom talk BUT this is where everything got a little crazy. A Disney worker was walking around with his bullhorn saying in his very happy Disney worker voice that there was lightening in the area & we were seeking shelter. WHAT??? A ton of people got out of line but we decided to take our chances since we knew there was no way we'd get to a bathroom once we were inside. Imagine 12,000 people in a building. We had our turn & all was good. We made our way to shelter. A Disney worker told us they'd hold the race an hour before cancelling it. 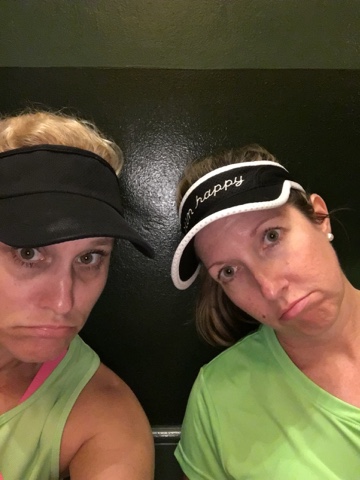 We weren't happy to hear that. We overheard another worker say that if they cancelled they'd need all the buses to bring us to Epcot. At least we'd still get to go. There were lots of rumors flying around about shortening the race, cancelling it, etc. I couldn't check FB or Twitter for updates because so many people were on their phones nothing would connect. I could text so between Dean & my friend Vicki we found out that bad weather was in the area & that we would race but it would only be 7 miles & we were skipping Animal Kingdom. Not ideal but better than a cancelled race. Cindy was so sick with sinus & upper respiratory crud that it worked out good. We were scared she wouldn't be able to run at all.

They made the announcement that we were allowed to go to our corrals. YAY! 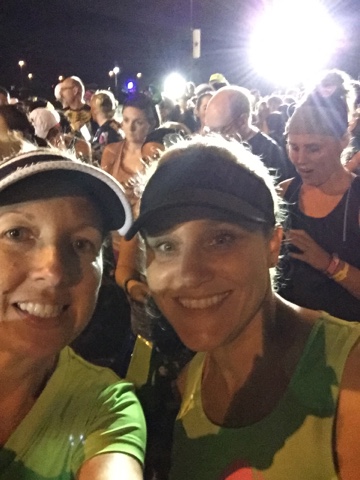 The starting line. Each corral got fireworks to start! 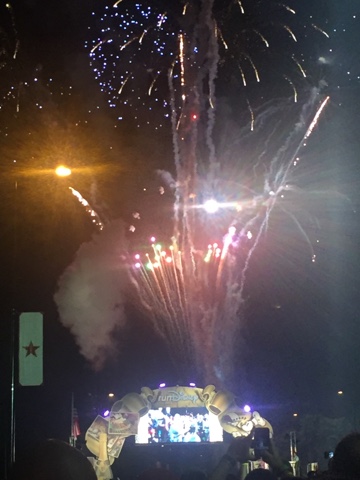 And we were off! It seemed weird to actually be running. We'd been planning this for so long! 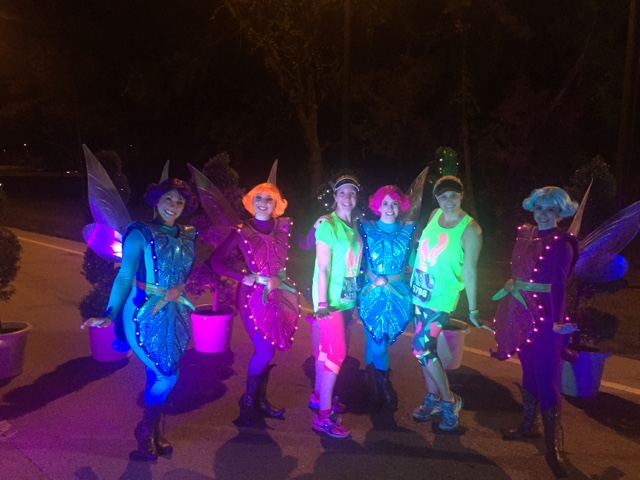 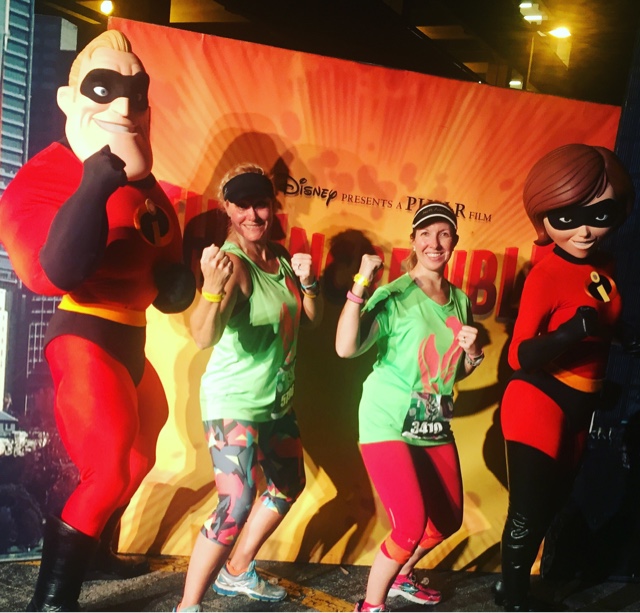 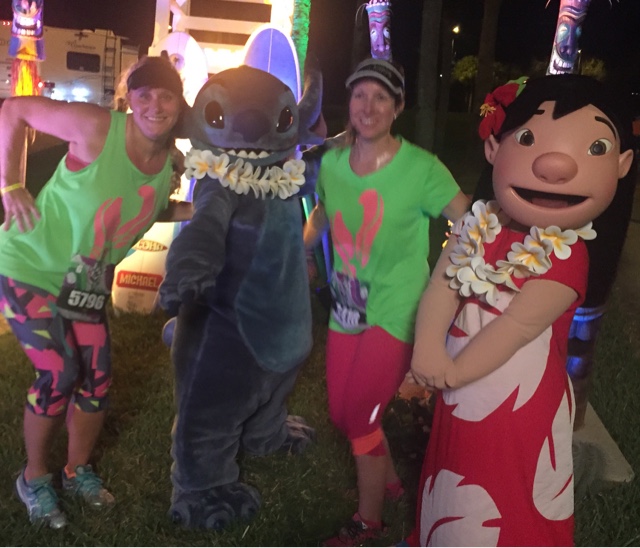 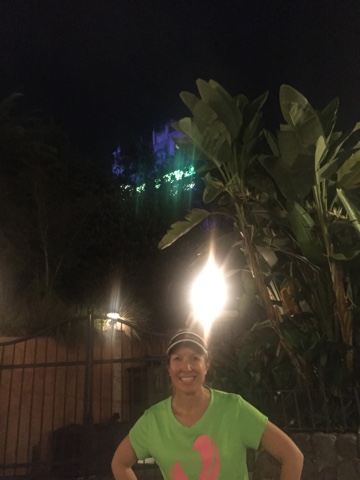 That's Hollywood Studio's in the background!

I LOVED running through the Osborne Family Lights. 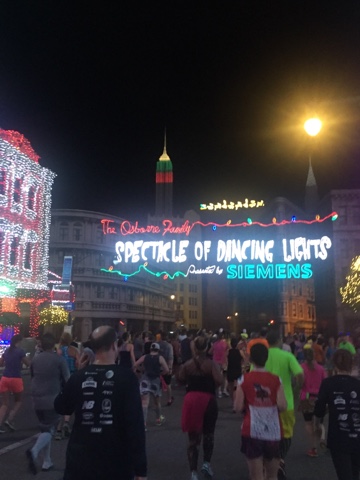 Purple & gold lights? We had to stop! Even though at that moment LSU was losing to Alabama. 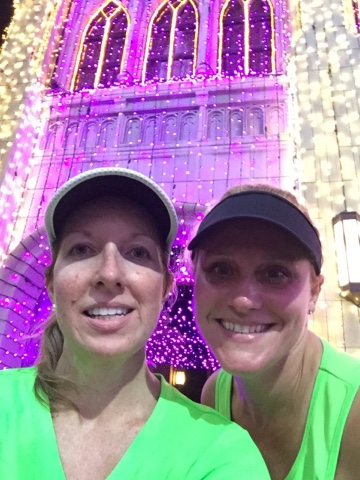 I really like running along the boardwalk too. Everything was lit up & really pretty & there were a ton of spectators in different spots along the route.


We didn't have a goal for this race. Originally, I was planning to start in my corral, Cindy in hers & the rest of the crew were in theirs. They were in the same corral. With Cindy being sick & me not wanting to run a fun race by myself, I started with her. You can move to a slower corral just not a faster one. We were going to run/walk based on how Cindy felt. Well, she rocked it. The only time we walked was through water stations & that's only like a few seconds & then towards the end there was a hill & we walked up it & then started running again. 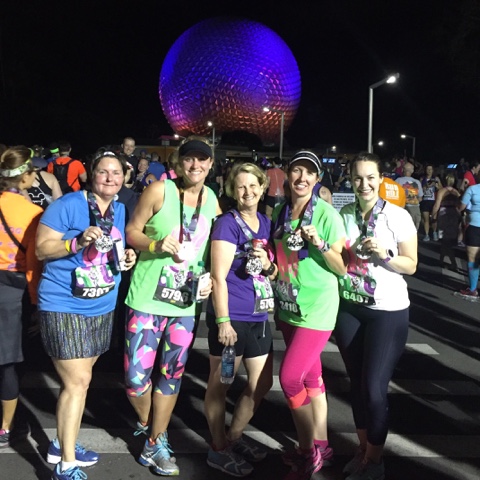 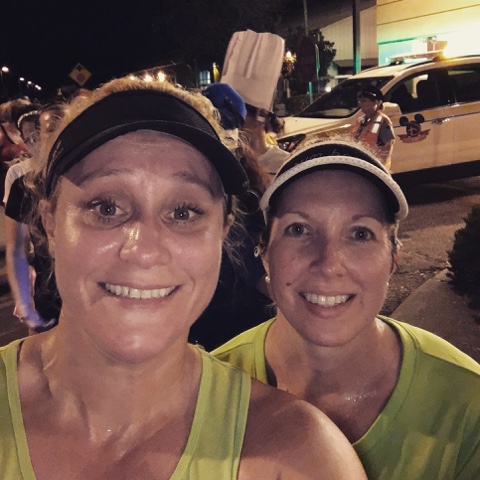 There was beer, wine, Cokes, water, Powerade & fruit at the finish line. After they gave you your medal there was someone handing out the towel things that you wet that get cold & we got a little box of snacks. There was also a band playing. I completely forgot that Mickey & Minnie were at the finish line so no Mickey pic. Oh well.

All weekend there were signs all over the place about how there would be intense heat for the race & take precautions. Well, if you're from up north, yes. If you're from Louisiana it's no different than running in August or September.

We ate our snacks, drank our wine & then hit up the rides. Spaceship Earth, Test Track & Soarin' were all open so we got to ride & then we went to the countries & experienced some of the Wine & Dine Festival. I wish we would've had more time here. I would've liked to have tried more food & drinks. 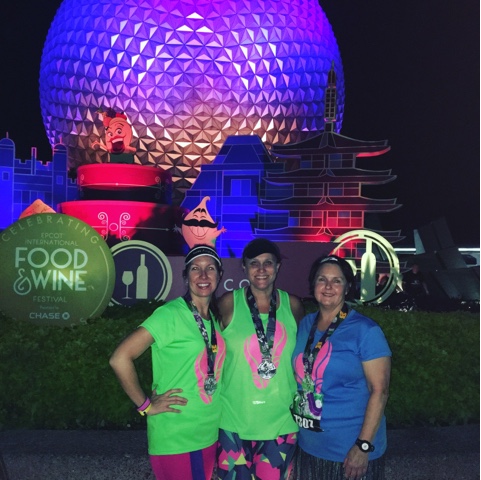 Everything was so much fun & there's still a little more for later!

Have a great weekend!